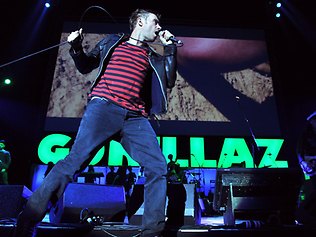 ELTON John is in town on Wednesday, Stevie Nicks on Saturday and the Gorillaz have also launched their new album. It’s a big week for music with Screamfeeder and Stereosonic adding to the bill. Music writer Noel Mengel gives us the rundown of the top five music events this week.

He opens his Australian tour with his first Brisbane show in five years at the Entertainment Centre tomorrow, no doubt adding a few songs from his excellent 2010 collaboration album with Leon Russell, The Union, to the set.
Elton John, Brisbane Entertainment Centre, Wednesday, November 30. www.ticketek.com

After 20 years of fine rocking, local heroes Screamfeeder are playing their last Brisbane show for the foreseeable future, with Tim Steward pursuing his other band We All Want To and drummer Dean Schwereb moving to the UK. It’s a great line-up with Violent Soho and Face/Off also on the bill

The accidental band that roared. When Damon Albarn started working on recordings in his home studio, he had no idea the result would be something that became even more popular than Blur. Ten years on, the band behind the cartoon characters release their first best-of.

Nicks makes one of her frequent end-of-year tours of Australia, this time without Fleetwood Mac and playing songs from her solo career including latest album, In Your Dreams. In support is another artist gone solo, Dave Stewart of The Eurythmics.