A Backpackers day in Brisbane

Who says Brisbane is barren for tourists? 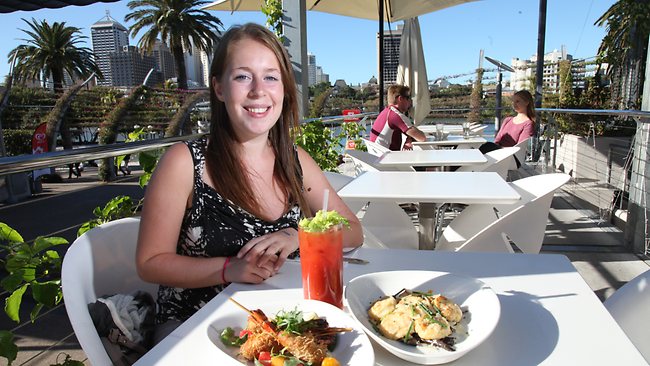 BRITISH backpacker Lucy Carty arrived in Brisbane with two days to spare and very little idea about how she wanted to spend her time.

The 19-year-old was travelling on a relatively tight budget, so she wanted to incorporate cheap or free activities into her day. To hear her views on the city, which has come under criticism this week for not offering enough to interest tourists, The Courier-Mail sent her out for the day armed a packed itinerary recommended by Brisbane Marketing.

Here’s how Ms Carty spent a day as a tourist in Brisbane:

8.30am: I had breakfast at my hostel to save money. The hostel had a big kitchen so I could buy some food from the grocery store and make my own breakfast.

9.30am: Then I headed over to the Story Bridge climb. It was fantastic. I thought I would do it first thing because it’s a really great introduction to Brisbane. They tell you all about the city and point out where everything is, and give you a bit of the history. I would have paid the $89 if it was not offered for free. (Story Bridge Adventure Climb offered Ms Carty the experience for free.) It was definitely worth it.

12pm: I caught a bus to the Cultural Centre and went to GoMA to check out the surrealist exhibition. It was awesome. I could spend hours in there. I was able to get in on a concessional price using my international student card, which was $16 (adults are $20). I thought it was a pretty reasonable price.

2pm: I was starving so I decided to have a big lunch. I wouldn’t normally have spent that much but, to be honest, I do splash out once in a while. I wanted “traditional” Aussie food so I went to the South Bank Surf Club that looks over the beach at South Bank. It was just how I’d imagined Brisbane.

3pm: I walked across the bridge into the city to do some shopping. That was good. There are cheaper ones and then upmarket stores like Tiffany’s.

4.30pm: I caught the CityCat, which was amazing, to the Powerhouse for a drink. Sitting out on the balcony overlooking the river again was great. I love it how the city seems to centre around the river. I saw there are usually loads of free things on at the Powerhouse which I really liked. I was going to hang around for a show but decided to go into the Valley for dinner.

7pm: I met up with some others from the hostel and we went to a place that was serving $4 meals. I can’t remember the name of it but it was awesome. It was good not to have to spend too much on dinner. We stayed out in the Valley for drinks afterwards.