Get revved up for Greazefest

A few revs from a vintage hot rod can drive most men into a swoon, but throw in some leather jackets, underground music and a swarm of rockabilly girls and you have a recipe for the swingingest weekend since Buddy Holly’s final tour.

The annual Greazefest Kustom Kulture Festival will take over the Rocklea Showground on August 5-7, showcasing pin-up girls, international bands and epic cars from the decades before plastic hatchbacks. 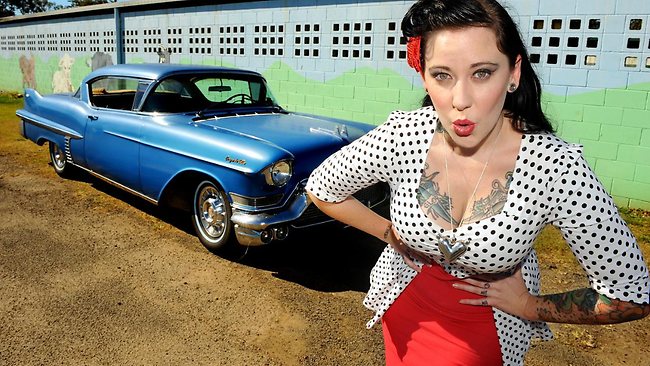 But when it comes to retro rockabilly, few realise there’s more to the scene than pincurls and polkadot circle skirts.

The smell of old leather and fresh paint permeates the cabin of 22-year-old Drea Morsby’s imported 1962 Falcon as she drives the hulking pink beast through empty Kenmore streets. It’s hard to hear her over the sound reverberating from under the hood but the way her tiny tattooed arms handle the weighty chrome classic makes it clear that this isn’t just a weekend hobby.

“I love driving and people love to get together for a drive. You can’t really do it in modern cars because they’re not fun like these ones,” she says.

“My dad and granddad are Jaguar men and they’ve kind of gone, `Ew, you’ve bought an American car!’ I guess I’m a bit of a rebel, I’m tattooed and I’ve got an American car.”

The young model and aspiring artist has been the face of Greazefest for several years.

Walking into her humble brick house is like entering the crash site of a time machine. An elaborate duchess decorated with silver brushes and sepia pictures of a soldier sit in the corner of her room set off by leopard-print coats, parasols and posters of pin-up girls.

Walking up to her plentiful hat rack, the blonde bombshell models an old wartime army cap before digging out a fitted skirt covered in frills.

“I wear pencil skirts so much and it’s such a form-flattering garment, you can just mix it up with different tops and it’s very versatile,” she says. “There’s a few sites around that specialise in the authentic style and of course eBay which has a lot of vintage things.

“For real `50s dresses in good condition, you can pay hundreds of dollars.”

Those dated black and white horror films that have poorly-disguised aliens creeping up on teenagers at Makeout Point are one of many things that inspired Morsby’s look, which frequently includes seamed stockings, polkadot headscarves and red heels.

“Older ladies in the street go `oh, I would’ve worn something like that when I was young’. It’s the biggest compliment.”

Unlike her predecessors, Morsby sports elaborate tattoos with swallows, anchors and cherries inspired by trashy old tattoo parlours that served navy folk back in the day.

“You get a few older folk who are a bit narrow-minded and think I’ve ruined myself or think I’m wild when I’m really a goody-two-shoes,” she says. She has the blue and red twin swallows on her chest once popular among burly sailors.
She says she would love to pick up the needle herself and create intricate ink artworks on human canvasses one day, but for the time being she is content displaying her paintings at events like Greazefest, in between pulling shifts at Chermside’s retro-chic boutique, Kitten D’Amour.

Besides, not being confined to a cubicle allows her to attend the niche rockabilly gigs around Brisbane at places like The Jubilee. “To me, the Brisbane scene is a mixture of all ages and everyone’s really friendly. They’re the nicest people I’ve ever met and we all go out and have fun.

“My friends and I like to drive around in the car, and a while ago, myself and a couple of girlfriends, we were just driving to a gig in the Valley and a car full of dudes pulls up next to us and start yelling that we were Marilyn Monroes which was kind of odd.”

Hoons aside, it’s hard not to notice the beautiful primed women like Morsby that you see checking out vintage markets in the Valley and in a world of ripped jeans and Crocs, rockabilly provides an escape for those who seek the style of yesteryear.

But those of us who can’t afford to import the classic cars will just have to be content with blaring 4KQ in our microcars while figuring out how to add a chrome bumper bar without the hatch sinking to the ground.